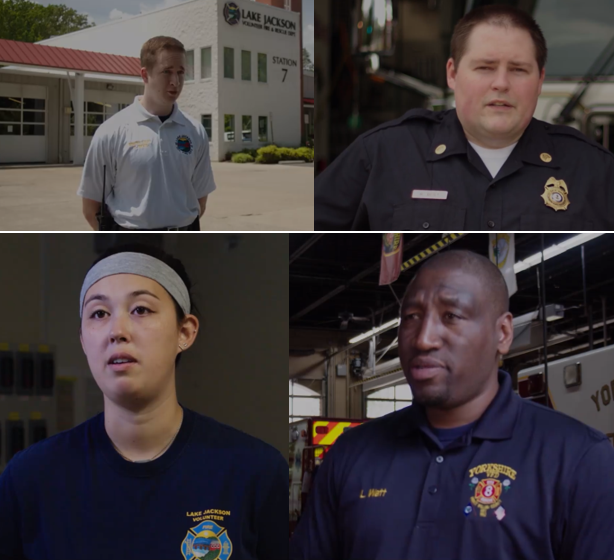 During a crisis, members of the Prince William County Fire & Rescue System are there to help.

Taxpayers fund the fire and rescue system, according to Dale City Volunteer Fire Department Director and Sergeant RJ Best. A tax levy covers the operational costs of the volunteer fire departments, including equipment and rigs.

Some members have joined recently, others began serving at volunteer fire departments decades ago.

Brie McCluskey has been at the Lake Jackson Volunteer Fire Department for a few years.

“It’s probably been the best three years of my life, and I really couldn’t imagine doing anything else,” McCluskey, an EMT, said. “Being part of the fire and rescue service has meant so much to me, and has really helped me grow as a person. It’s how I figured out what I want to do as a career.”

“Everyone gets along, it’s not the guys and the girls at all,” Stannard said. “We are all brothers and sisters and this is definitely something, like I said, that is for everyone, and don’t let anyone tell you otherwise.”

With the volunteers, comes additional resources and increased capacity.

Nokesville Volunteer Fire Department can sometimes handle as many as four or five emergencies without requesting outside assistance, according to Lieutenant Tyler Garner.

“That decreases response time, it increases our ability to get to … the patients or to whoever’s having the emergency and mitigate it quickly,” Garner explained.

The volunteers also have an economic impact.

Volunteers must have the same certifications as career emergency personnel, according to Lake Jackson Volunteer Fire Department Chief Carl Hood

“Whenever we go out the door in those units, the expectation of the community is that we’re providing top notch service — whether we’re volunteers or career — and I think it serves the community very well that they’re able to receive that at an advantage toward the tax base where we’re providing it for free versus at a salary,” Hood added.

Being a volunteer is a time commitment, but it also has its perks.

In return for their dedication, fire department members develop new skills, such as problem solving and critical thinking, and create close bonds with other volunteers.

“Those things make it worthwhile, and that’s why I do this — to … try and give back more to the fire service than it’s given me, but I’m not sure I’ll ever be able to actually do that,” Garner said.

It also allows members to contribute to their community.

“It also shows other kids or people like me who want to give something back and don’t know how, you can join the fire service and be a firefighter, you can be [an] EMT — like what I’m doing right now — and I think that really works because you get [an] opportunity to see your neighbors and you’re helping out … Like what we say, ‘neighbors helping out neighbors,’” Lawrence Watt from Yorkshire Volunteer Fire Department said.

To join or learn more information about the volunteer fire departments, visit their websites by clicking the links below: