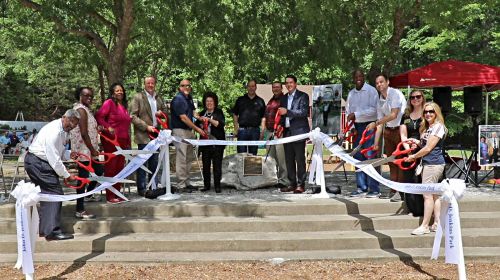 One man’s love for the great outdoors is being shared with the Dale City community.

Leadership Prince William (LPW), Comcast and the Prince William County Department of Parks, Recreation and Tourism partnered with one another for Comcast Cares Day on Saturday.

For this year’s community service day, volunteers set to work at The Arc of Greater Prince William and the John D. Jenkins Park, 13499 Hillendale Drive in Dale City.

They repainted pavilions, assisted with mulching, and planted flowers at the park, where a rededication took place.

During the program, John Jenkins, the county’s longest serving supervisor, was honored.

State Senator Jeremy McPike mentioned a few ways that John Jenkins and his wife, Ernestine, have been involved in the community.

“The list goes on and on and on, and I think that’s so meaningful that the re-dedication involves organizations and volunteers coming forward to spruce up, to see something and leave it better than you found it,” McPike said.

“He loved parks and recreation and he loved children, and he knew the connection between parks and strong communities,” Department of Parks, Recreation and Tourism Director Seth Hendler-Voss said.

Neabsco District Supervisor Victor Angry discussed the impact that he made on the community.

“When we look at the parks and you talk about this park being named for John Jenkins and the kids and the elementary school, you realize just who that man really was,” Angry said. “And we can all only hope to be that good in life.”