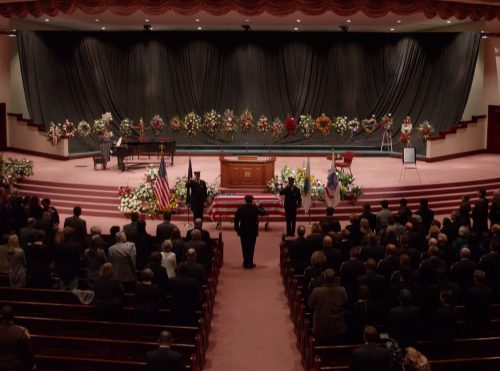 The Prince William County community gathered to remember a family man and leader.

A funeral that honored the life of John Jenkins, Prince William County’s longest serving supervisor, was held at Hylton Memorial Chapel on Wednesday.

He passed away at Inova Fairfax Hospital last week.

Family members and friends remembered John Jenkins at the Woodbridge service through singing and speeches.

Gordon Jenkins, one of the Neabsco District representative’s sons, described him as the family’s “rock.”

“Whenever we were with our dad, we never felt outmanned … We never felt in any danger, at all, when we were with dad, with grandad, because in his strength, he projected for us — as a family —  a boundary of security for my dear mom and for all of us in the Jenkins family,” Gordon Jenkins told funeral attendees.

John Jenkins loved his family, who felt safe when they were around him.

His passing, Gordon Jenkins admitted, has been “intense.”

“To some degree, he have for a long time had great fear and dread what this day would be like, because he was all of those things to our family,” Gordon Jenkins said. “And may I say to you that facing the reality of his death is far worse and more painful than we could have ever imagined.”

The Dale City resident’s love extended beyond his family, according to his son, Warren Jenkins.

“Dad was a friend to … many different people,” Warren Jenkins said. “He made friendships that lasted and ran deep … He said, ‘I love you.’ with a helping hand often to people that had never seen that before.”

John Jenkins also made — and is continuing to make — a lasting impact on many who didn’t know him.

“There are, literally, thousands of children who are going to better Prince William County schools, because — for decades — John Jenkins cared to make education a priority,” Warner said.