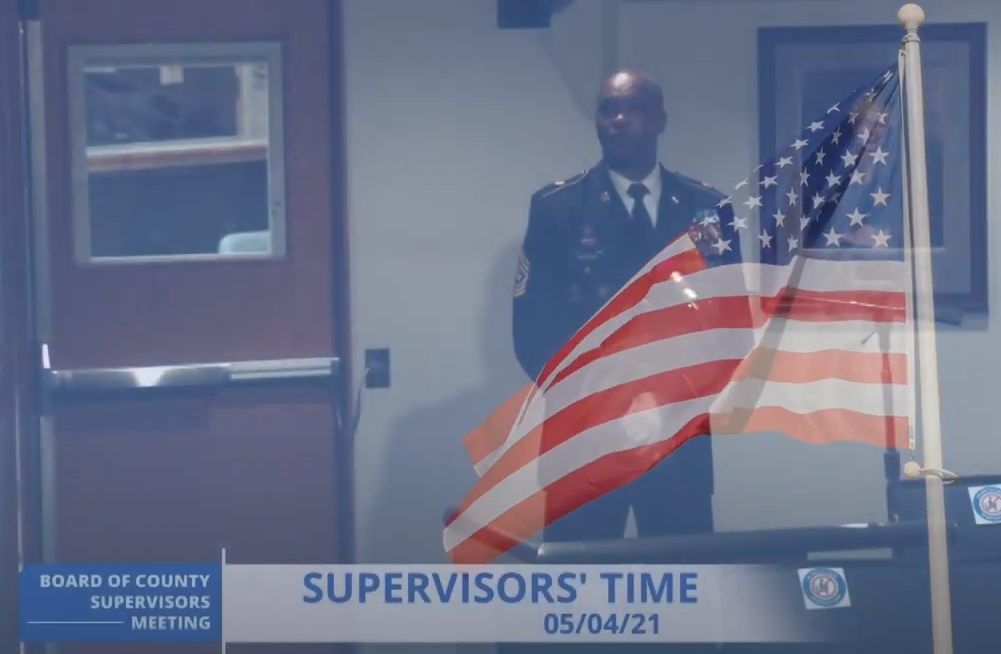 Retired U.S. Army Sgt. Maj. James A. McGruder recently graced the Prince William County Board of Supervisors Board chambers with a recitation of “I Am the Flag,” an ode to the flag of the United States of America. Sgt. McGruder provided the presentation at the invitation of Supervisor Victor Angry, considering the upcoming Memorial Day remembrance.

The ode speaks of the flag being revered, loved, saluted, recognized and respected around the world. It talks of the peace, honor, truth, strength, freedom and justice the flag represents.

McGruder, who retired from the U.S. Army in 2015, said he appreciates the United States because of what he saw abroad in his career. “Sometimes people take it for granted that we’re in a great country, but when you go overseas and come back, you know you’re in a great country because you’ve seen the difference.”

“I Am the Flag” by Howard Schnauber, originally known as “My Name is Old Glory,” also speaks of the flag-bearing witness to the nation’s finest hours and of the finest hour yet to come. It speaks to the flag being torn and trampled, burned and torn only to rise again.

The ode is meant to remind people of what the flag represents. “I just hope they have a better perspective of the flag, what it means and how far we have come. You wonder why people want to come to the USA. It’s because we are the land of the free, the land of opportunity for everyone.”

McGruder’s presentation drew a standing ovation from the Board and those present in the chambers. Click on this link to view the presentation.