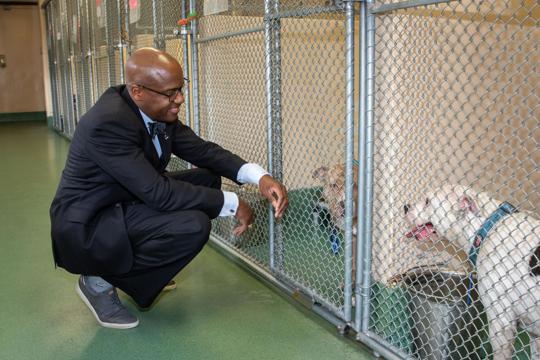 “Unacceptable” is the word Supervisor Victor Angry used to describe the Prince William County Animal Shelter after touring the facility Friday. But Angry was quick to praise the shelter staff for doing the best they could in a cramped building that’s 44 years old and clearly in need of a major upgrade.

“We can talk about it all day, but when you see it, it makes it a reality,” said Angry, D-Neabsco, who was elected in April 2019 but had not previously visited the animal shelter. “It’s a very clean environment, but it’s very packed in there. It’s too tight for what they are doing.”

The animal shelter, built in 1975, has been slated for replacement since about 2015. That’s when the former board of supervisors began discussing a new shelter after allocating about $30,000 to upgrade the facility’s heating, ventilation and air-conditioning system after it was partly blamed for an outbreak of the highly contagious calicivirus, also known as FCV, that forced the shelter to euthanize 73 cats.

In 2017, the supervisors voted to spend $15.1 million to demolish the existing shelter, at 14807 Bristow Road near Independent Hill, and build a new one about four times its size on the same site.

At the time, a county audit of the animal shelter showed the shelter was taking in as many as 4,000 animals a year but euthanizing about 20 percent of them, sometimes due to overcrowding.

The design the supervisors approved for the new shelter, dubbed “option C,” is intended to address that problem by not only providing more space but also by following the Association of Shelter Veterinarians’ guidelines for standards of care in animal shelters.

Angry’s visit came about 10 days after the supervisors learned construction on the new shelter will be delayed until at least late 2021 because of higher-than-expected costs. The lowest bid came in about $13.2 million, which is $2.7 million more than the $10.5 million the county allotted for general construction.

Now, county staff is working with the lowest-bidding contractor to make cost-saving adjustments that are intended not to significantly alter the new animal shelter’s features, according to Tom Bruun, director of the county’s department of public works.