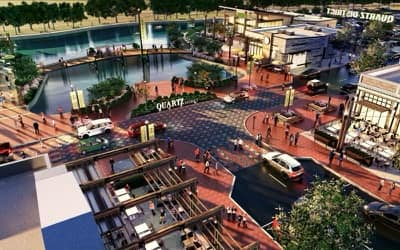 Last night, he Board of County Supervisors unanimously voted to approve the Quartz District application, which will be located at the intersection of Minnieville Road and Prince William County Parkway.

The Quartz District is an exciting opportunity for Dale City and the Neabsco District to grow in unique and innovative ways. Not only does this proposal benefit Dale City, but it provides multiple benefits to all County residents that travel Prince William Parkway to the eastern areas of the County. The Neabsco District office has been working on this project for several years. It is a product of the Dale City Small Area Plan, a TLC grant, a community charette, and two bond referendum items which were voted on by the residents of Prince William County in 2019 and included an improvement project and an outdoor park project. The project presents a unique opportunity for achieving other public initiatives such as a 2019 Bond Referendum that included an “Urban Adventure Park” and a Minnieville/Parkway intersection improvement project. Quartz has also dedicated property for a future elementary school site. These are just a few of the indisputable benefits. This proposal will serve the best interests of the County in numerous ways, to include establishing a new mixed community which will rival our neighbors to the north and provide the necessary revitalization needed for Dale City.

While working through the development process, I worked on addressing road improvements that would supplement the new development during the project build out, including the Old Bridge Road/Prince William Parkway and Minnieville/Parkway intersection improvement projects.

I would like to thank County staff for their tireless efforts to work through this large project with my office, along with the community and the developer, Buchanan Partners. I very much appreciate the developer’s willingness to incorporate requested changes made by our office and I look forward to seeing Quartz come to fruition.