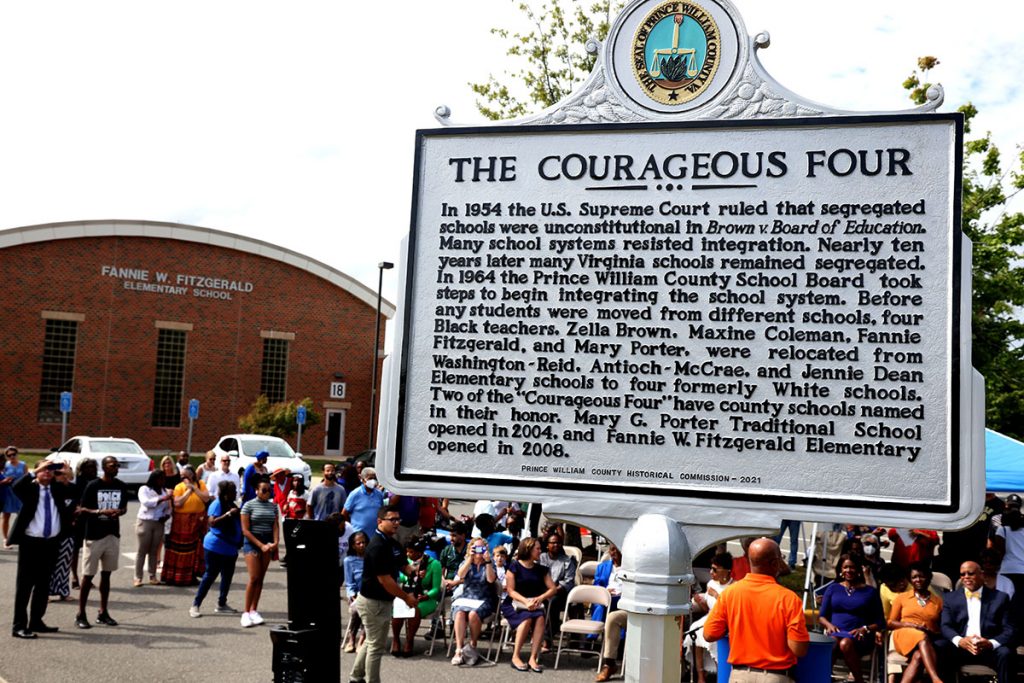 “I’m so thankful that I was able to participate in the accomplishments that were made and the recognition that we have received for our efforts,” said Zella Brown after the unveiling ceremony.

“There was a barrage of emotions that exploded in me because I didn’t think that anybody would reach out to where I was, to pull me in to be a part of the school. I guess in a sense it was working on myself because I had no encounters with anybody. I was not confronted. There were not issues as far as race was concerned. I met some very nice people. They were friendly. They offered to show me around and tell me where things were located, so it worked out well. Of course, I was nervous because I did not know what to expect.”

Prince William County Neabsco District Supervisor Victor Angry, the first African American elected to the Prince William Board of County Supervisors, said the marker can serve to get a conversation about race going.“It’s something that we do need to talk about and continue to create markers such as the one we’re going to unveil here, that depicts the history that needs to be told. These stories need to be told. People need to know.”

Fannie W. Fitzgerald Elementary School Principal George Wright said he was grateful to have partnered with the Commission and the Historic Preservation Office to get the marker erected.“This event and marker are an expression of honor for the work performed by Zella Brown, Maxine Coleman, Fannie W. Fitzgerald and Mary G. Porter to integrate schools in Prince William County. It shows that it is important that each student is exposed to inclusive practices and equity with an expectation of excellence from every student and adult every day. To all the family members of the Courageous Four, I would like to express a ‘Thank you’ for your contributions and commitment to ensure that the legacy and the work of the Courageous Four continues to live on until this day.”

Fannie Fitzgerald’s daughters Benita Fitzgerald Brown, a gold medal Olympic track star and Kim Fitzgerald Lennon, a school teacher at Fannie W. Fitzgerald Elementary School, said they were proud of their mother and the rest of the Courageous Four.

“My mother and the ladies being honored here and the countless other educators who have selflessly committed themselves to bringing out the best in young people are all to be congratulated on building a strong foundation on which we can build our educational legacy,” Lennon said.

“They all represent many unsung heroes who have quietly enacted change behind the scenes — not calling a lot of attention to themselves, not at the time at least, being lauded for their efforts — just quietly doing the right thing,” Brown said.

Mary Porter’s daughters Gwen Porter Washington and Hazel Porter Sykes read a poem to honor the Courageous Four. The poem spoke of the fear and uncertainty the women faced and the high expectations they set for themselves and their students. The poem went on to thank the women for their perseverance and success and for not settling for less.