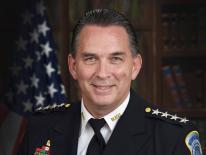 The Prince William Board of County Supervisors is excited to announce the hiring of Peter Newsham as the new Police Chief for Prince William County. The announcement comes following a nationwide search with a public survey and competitive hiring process. His expected start date is February 1, 2021.

Chief Newsham earned a bachelor’s degree in Political Science from the College of Holy Cross, and a Juris Doctorate from the University of Maryland School of Law. He is a member of the Maryland Bar. He has attended numerous police executive trainings and seminars and is actively involved in the Major Cities Chief’s Association and the Police Executive Research Forum. Additionally, he has attended the Anti-Defamation League’s (ADL) training on Law and Society, and the ADL’s National Counter-Terrorism Seminar in Israel.

“I am excited to join the team and look forward to making a difference in the community,” said Chief Newsham.
Chief Newsham was selected as the top-ranked candidate after a national recruitment process. The County received 50 applications from 16 states and Washington, D.C. The candidates went through an extensive vetting process as part of a contract with a recruiter, GovHR USA. Chief Newsham distinguished himself throughout the intensive recruitment process.